New York, Once the US Pandemic Epicenter, Joins Other States in Letting Gyms Reopen

When some people dream of a second (or even third) home or property, they imagine views of a pristine lake or a peaceful golf course. Not Julie Hertzberg. When it was time for her to take the plunge, she wanted thundering V-8 engines and the smell of hot rubber on pavement. 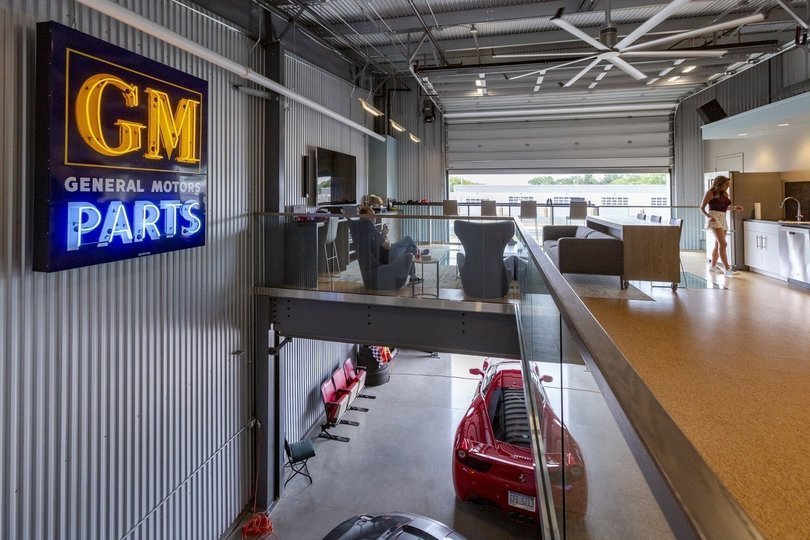 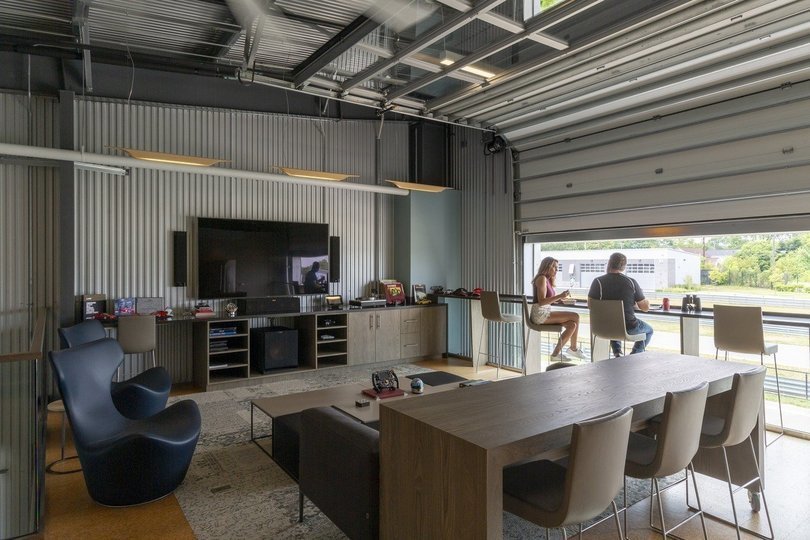 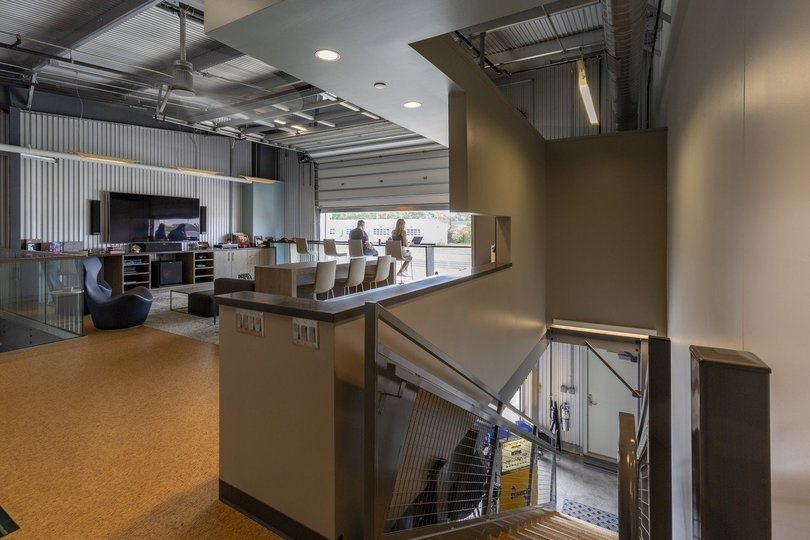 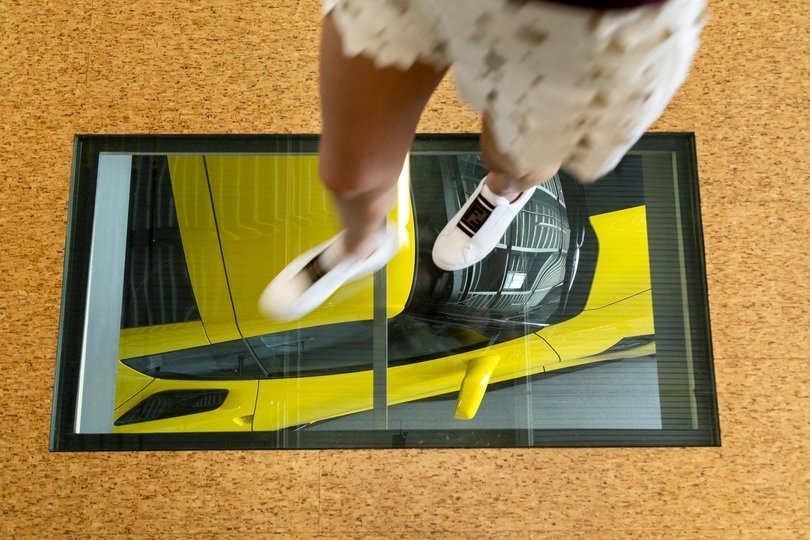 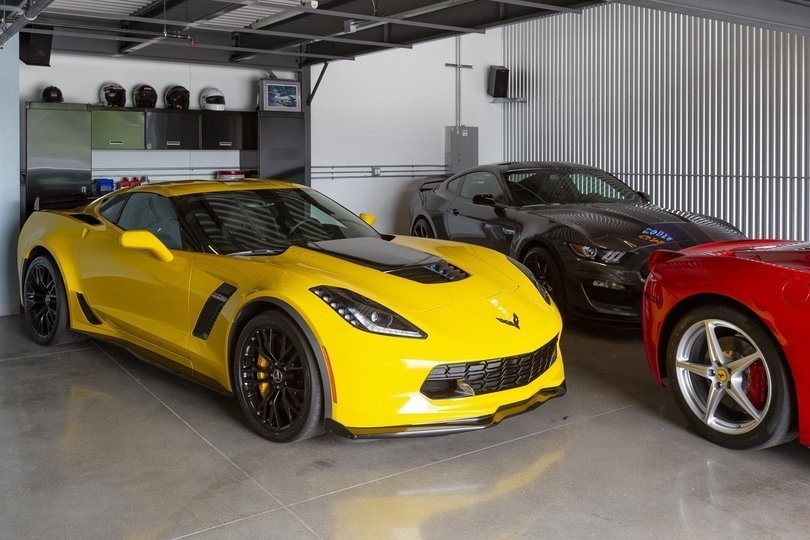 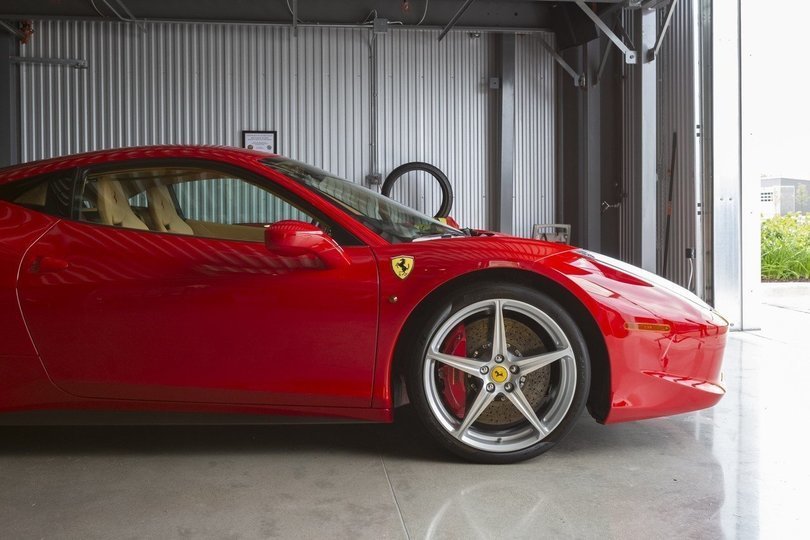 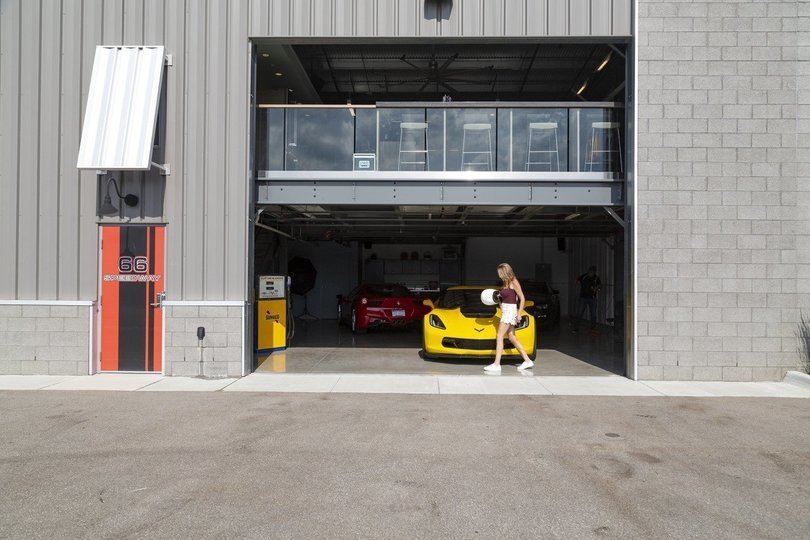 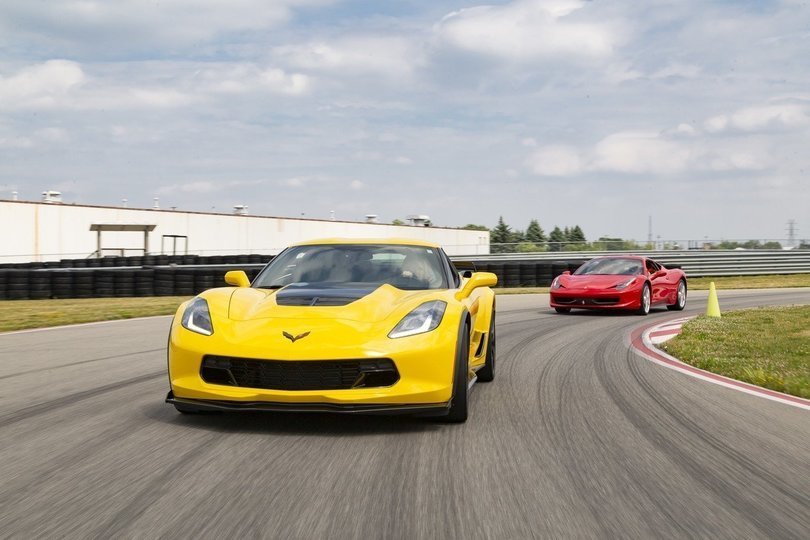 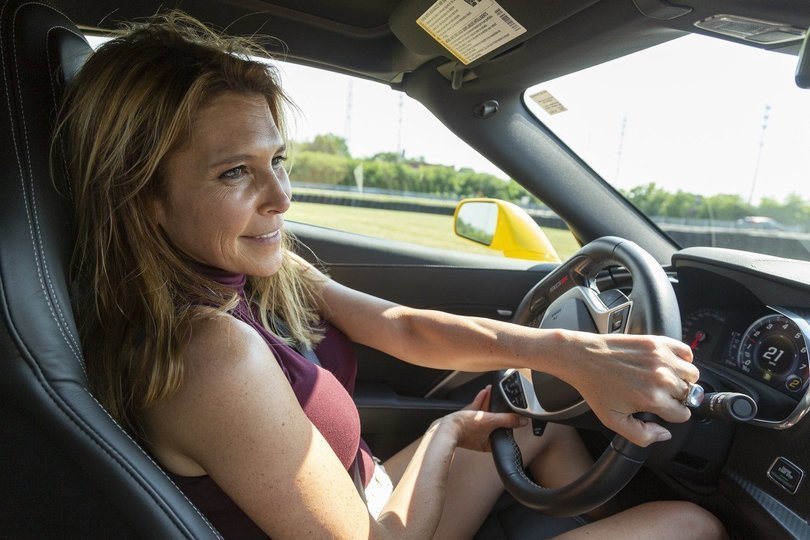 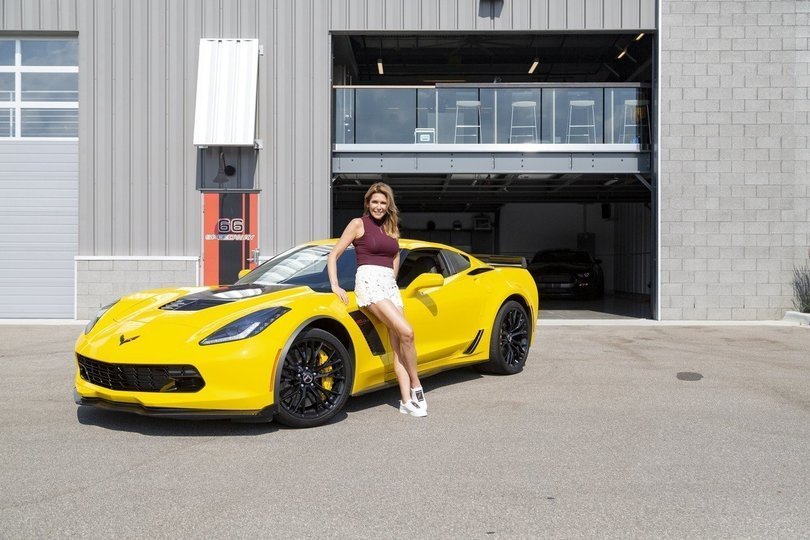 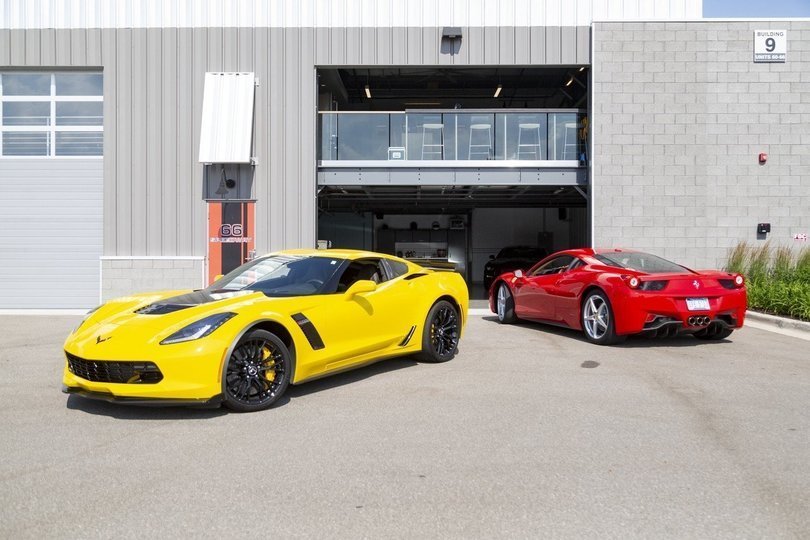 Ms. Hertzberg, 46, a managing director in the Detroit office of the financial consulting firm Alvarez & Marsal, and her husband Robert Hertzberg, 65, a partner with the law firm Pepper Hamilton, bought a car condo. The 1,200-square foot unit started out as an empty box, and the couple turned it into a two-floor space. On the bottom floor is a garage with a polished concrete floor. The couple’s 2016 Chevrolet Corvette Z06 (bought new for about $105,000) and 2017 Ford Mustang Shelby GT350R (about $65,000) are considered two of the most high-performance cars ever built at their price-points, while their 2010 Ferrari 458 (about $235,000 in 2010) is no slouch. When time permits, the couple can be found throttling these vehicles on the high-performance test track that sits right outside their condo. Otherwise, the cars make for gleaming sculpture pieces.

"For the upstairs," Ms. Hertzberg says, "we wanted a cigar-bar feel but also a functional living space." There is a king-size Murphy bed for overnighters, a bar, kitchen, an entertaining space, plus a glassed-in bar space that looks out over the speedway, for spectating the action.

The upper floor of Julie and Robert Hertzberg’s car condo at M1 Conourse has special windows that let them see down to their vehicles parked below.Marvin Shaouni for The Wall Street Journal

The couple’s car condo is in a development called M1 Concourse, built on 87 acres in Pontiac, Michigan. The development has everything needed to draw in a highly specific clientele—car nuts. The winding track measures 1.5-miles long. There is a private motor sports club, and 173 car condos built and sold thus far. "There’s a special vibe to the whole place," says Ms. Hertzberg. "You wouldn’t find it anywhere else."

M1 Concourse is one of a growing number of developments nationwide aiming to draw car lovers into a wholly different kind of real-estate market. If there is wealth in a city or town, there are likely to be car collectors, and increasingly, car condo campuses. There’s Iron Gate Motor Condos in Naperville, Illinois, outside Chicago, and Trove, outside Vancouver. There’s CollectionSuites outside Miami, and Monterey Motorsport Park in Monterey, California.

M1 Concourse is unusual for having its own performance test track. The first condos were completed in 2015. Purchasers bought an empty box and then built out their spaces as desired. The Hertzbergs purchased their space at a discount for $225,000 because they bought before construction was completed. Ms. Hertzberg says if she tried to sell that same 1,200-square foot empty box today for $550,000, there would be a bidding war. They put $200,000 into the build-out, and the work isn’t done yet; they are planning to build an elevator lift, so they can carry a car from the downstairs floor upstairs, to make it a showpiece when they host parties.

For some, having this kind of space is all about the cars. "Space is key for car collectors," says Gordon McCall, 61, the California-based CEO of McCall Events and an investor in the Monterey Motorsport Park car condo complex. It has 86 units ranging from less than 700- to nearly 2,600-square feet. Two 2,094-square-foot units are currently listed for $747,000. "People do not want to have to sell a car to make space for a new one," said McCall. Others, he says, "trick out their spaces. You can have a satellite office, or a lounge where people can hang out in a place other than their home, while communing with their cars or motorcycles."

On other end of the spectrum are developments that aren’t condos at all, but rather multimillion-dollar mansions built around private test tracks the way homes are built around high-end private golf courses.

The Carousel turn on the North Palm Circuit at the Thermal Club in Thermal, Calif., wraps around the community’s clubhouse and restaurant.Eric Figge Photo

Across the country in Thermal, California, just outside Palm Desert, developers Tim and Twanna Rogers—former oil-industry entrepreneurs in their 70s who live in Palos Verdes Estates, Calif.—are trying to create the apogee of motor sports clubs. When they started building the Thermal Club in 2012, this section of earth was mostly scrub desert and rattlesnakes. Today, four racing circuits wind around a "motor sports village" complete with a clubhouse/restaurant and two shops where members can have their road and racing cars serviced by professional technicians. A pool and tennis club are in the making. The homes feature ground floor garage spaces for car collections and a luxury mansion feel above.

According to Mr. Rogers, there are 268 lots at the Thermal Club. Seventy-five have been sold, and 32 homes have been completed. On any given Sunday, Aston Martins and Porsches can be seen just about everywhere the eye turns, and at the lunch hour, the clubhouse fills with members—not in golf shirts, but in racing suits. A five-bedroom, seven-bath, 9,500-foot home is currently on the market for $3.6 million, while a 20,000-square foot home recently sold for $6.5 million, according to Mr. Rogers.

Real-estate projects that focus on a motor sport concept face unusual challenges, including noise ordinances and permitting for gasoline pumps. M1 Concourse’s track is directly adjacent to a residential neighborhood in Pontiac. The original developer, 49-year old Brad Oleshansky (who left the company earlier this year to create similar projects in other parts of the country) says the community embraced the project during development and construction in 2014 and 2015 because it was built atop a tract of land that was home to an abandoned General Motors factory.

As for noise, Jordan Zlotoff, M1 Concourse’s current CEO, says that the cars on its track are typical production performance cars that are built with noise dampening features. "We don’t do wheel-to-wheel competitive races with actual race cars," he says. There is no driving on the track after sunset, and there are restrictions on modified exhaust systems. (A phone call to the local police department in Pontiac confirmed there have been no recent complaints about noise.)

As for the price of the build-outs at M1 Concourse, Mr. Zlotoff estimates that owners spend anywhere from a couple of thousand dollars to roughly $1 million.

M1 has special street cred for another reason. It is located near the epicenter of American car history, just outside Detroit, the "Motor City." "I’m a Detroiter," says Laurie Cunnington, another M1 Concourse car condo owner. "Detroiters love their cars."

Ms. Cunnington’s condo looks out onto the test track.Marvin Shaouni for The Wall Street Journal

Ms. Cunnington received her 2,200-square foot car condo as a gift from her husband in 2015. (They are both entrepreneurs and former co-owners of the Ward Williston Oil Company.) The cost: $275,000 for the empty space, before the build-out. On the ground floor, Ms. Cunnington keeps a small collection of her rare Italian cars—a 1991 Lamborghini Diablo, a 2007 Ferrari F430, and a new vehicle that just arrived from Italy last month, Ferrari’s latest hardtop convertible, the Portofino. She is an unabashed fan of speed, and loves the fact that she has female neighbors in her development who, like her, love using the track.

Upstairs, her car condo is a fully-imagined entertaining space created by local designer Pamela McCarthy Designs, with lots of stainless steel accents and glass shelving. Ms. Cunnington wanted her space to be, in part, a paean to her home city, so the Detroit Wallpaper Co. custom-designed a panel for her with a pattern of Detroit street names and the names of Detroit-made automobiles.

"Everyone who has a place here knows everyone else," she says of M1 Concourse, "and everyone is very friendly, because everyone shares this passion for cars."